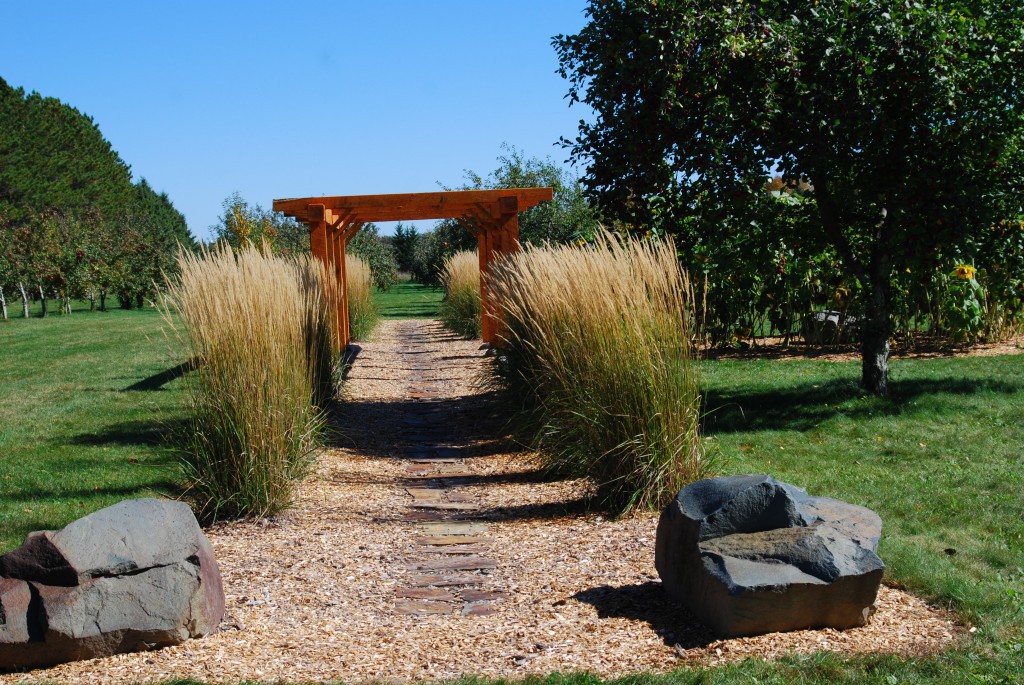 As many of our projects in the orchard, our Peace Garden began with an inspiration, and evolved over time through collaboration, hard work and continuing vision.

Jodi Baker, John’s wife, is a passionate gardener, as evidenced by the glorious garden beds surrounding the Orchard House Art Gallery. She’d heard the idea of a round sunflower garden ‘room’, complete with climbing morning glory vines and wanted to try and replicate this on the orchard grounds. When she approached John with the idea, his creative mind also started whirling, and in the brainstorm of planning that followed, a much broader vision became clear. In May of 2009, John pulled out the big Bobcat and dug a large circle in an opening in the back third of the orchard. The sunflower room began taking shape.

Perfect for sitting among the giant flowers, a large heart-shaped rock was placed directly in the center of the sunflower ring. A pergola was built next to the circle, using stones from the orchard grounds and reclaimed barn wood saved from the barn restoration that had taken place between 2007 and 2008. Stepping stones in beautiful shades of rust and gray created a walkway to the pergola, framed by towering Karl Foerster grasses that wave in the orchard breezes, golden sentinels that beckon you to the area. As they worked the garden, John and Jodi noticed how peaceful, quiet and serene the area felt, and began referring to this magical place as the Peace Garden, and the name, so well suited, simply stuck. In the first year, the sunflowers grew tall, and in subsequent years they change and evolve in their own characteristic way, at once towering over visitors like massive natural shower heads or drooping to the ground under the weight of their enormous flowers. Nature plays a part in how they look each year too, as storms can batter them, breaking the stems. They provide much needed shelter, seeds and nectar to the bees and birds of the orchard, which in turn helps with the pollination of the apple trees. It’s a win-win situation for everyone.

Despite attempts to preserve the original pergola, the wood did not last long out in the elements, pounded with wind and rain, drained of any remaining character by the sunshine, and in the Summer of 2013, John and his brother-in-law Jack, who doubles as an orchard employee, rebuilt the pergola with rough-cut beams in the exact replication of the original, cutting all the mortise joints by hand. The new version should withstand many seasons ahead, standing proud, offering a respite in the orchard, a place for rest, and admiration of the natural beauty of the sunflower room.

We hope you take time on your next visit to Baker Orchard to stroll out to the Peace Garden and enjoy its serenity.